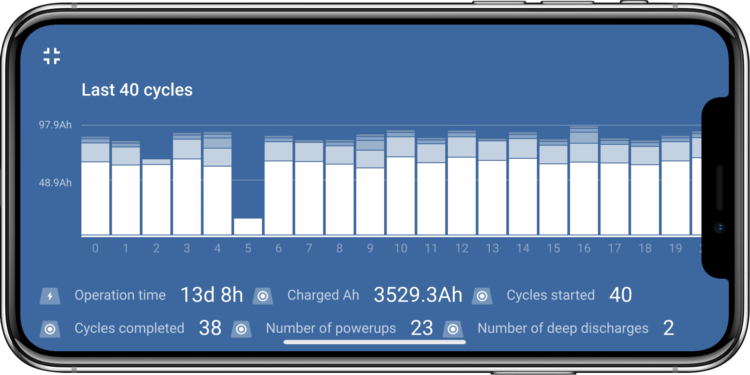 A new version of the VictronConnect App has just been released and includes a number of significant new features:

If you already use VictronConnect, it will update to the latest version automatically. If you’d like to download VictronConnect you will find a list of device/OS compatibility here.

Watch this video to learn both new Blue Smart Charger features, or keep reading below the video.

In-depth historical data can now be viewed for the last 40 charge cycles by clicking on the new HISTORY tab. Clicking on any of the forty columns (seen in the image at the head of this article) will provide detailed information. The top of the graph shows how much time was spent in each charge cycle, as well as how many amp-hours were charged into the battery during that phase. Below the bars there is more information on each cycle:

At the bottom, the tab shows the Totals. Here you can see how many charge cycles were started, and how many charge cycles were completed: a good indication to see if the battery is regularly achieving a full recharge. Important with lead batteries as commonly known, but also important for most lithium batteries since they need a full charge in order to balance the lithium cells.

Click the image to view the new history features in detail:

These chargers have a six or seven-step charge algorithms which is optimal for all common Lead Acid and Lithium Batteries. There is no need to tweak or update settings – in fact in many cases tweaking could result in an inferior charge performance for the batteries than with the default settings.

However, in some situations more specific settings are required, and these are now available. The new settings are configurable Absorption, Float and Storage voltages. As well as the Recondition setting and configurable temperature compensation value.

For even further tweaking there is the Expert mode; once enabled, the app allows changing practically all parameters and time limits used by the charge algorithm. Such as Bulk time limit, maximum absorption time and more.

The picture below shows the Advanced settings with the Expert mode enabled. There are more settings when scrolling up. To see all of them, download VictronConnect and use the demo mode.

Blue Smart Chargers – how to update

Both above new features require a firmware update of the Blue Smart Charger. To initiate that, first connect to the charger and then click the cog-wheel at the upper left. VictronConnect will now offer to update the charger. More details about the update procedure are in the manual – chapter 9.

The next new feature in VictronConnect that I want to highlight is the firmware update for our SmartSolar MPPTs. This VictronConnect version carries firmware versions v1.50 and v1.06, which have various improvements and new features. The main improvement is the updated version of Synchronised Charging.

Updated, you might wonder? Yes, updated. Already a while ago we released the initial version that added Synchronised charging over Bluetooth. It worked well for the vast majority of systems, but in some it had issues. For example Error 68 showing up when chargers were connected to an ESS system and at the same time configured for synchronised charging in a Bluetooth VE.Smart network.

Those have now been fixed and rigorously tested, and therefor I’m happy to -finally!- be able to announce the Synchronised charging feature.

Here is a screenshot showing the VE.Smart Network configuration page. The Synchronised charging icon in the “This Device” section indicates that this charger is teamed up with one or more other solar chargers. And below that it shows which other devices are in range.

Once configured for synchronised charging, the output power of all chargers can be seen when logged in to any one of them, as visible in this screenshot, see “Network total power – 3072W”:

For details about why, how and when to enable Synchronised charging, see the VE.Smart Networking Manual.

The time required for VictronConnect to connect to a Victron product and load its first page has been significantly improved. Which is a nice improvement, especially for impatient people like I am myself. It’s our aim.

By Matthijs Vader
May 18, 2020
Previous
Blue Power in Vanuatu
Next
Silence as Brazilian farm goes green 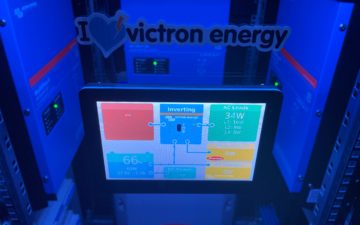 Victron Training in a cabinet ESS / Off Grid / 3Phase

Victron Ambassador Markus Pauritsch has come up with a neat and portable way to carry out Victron training for 3-Phase ESS and Off-Grid systems. He's... 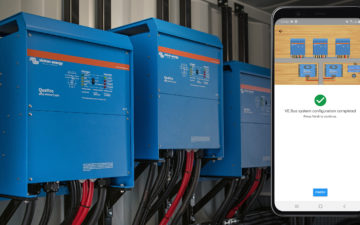 Good day! Today we are releasing a new version of VictronConnect. It has quite a list of improvements as well as updated product firmware versions....

Open
Cleaned my panels yesterday. Over 100% increase in