Australian national Evie Verdini Fensom has been into sustainable living right from school when she helped build a model house from straw bale and bamboo.

Now she has a three year old daughter, Audrey, that early experience is paying dividends as she and her partner, Tristan seek innovative ways to build themselves a family home. 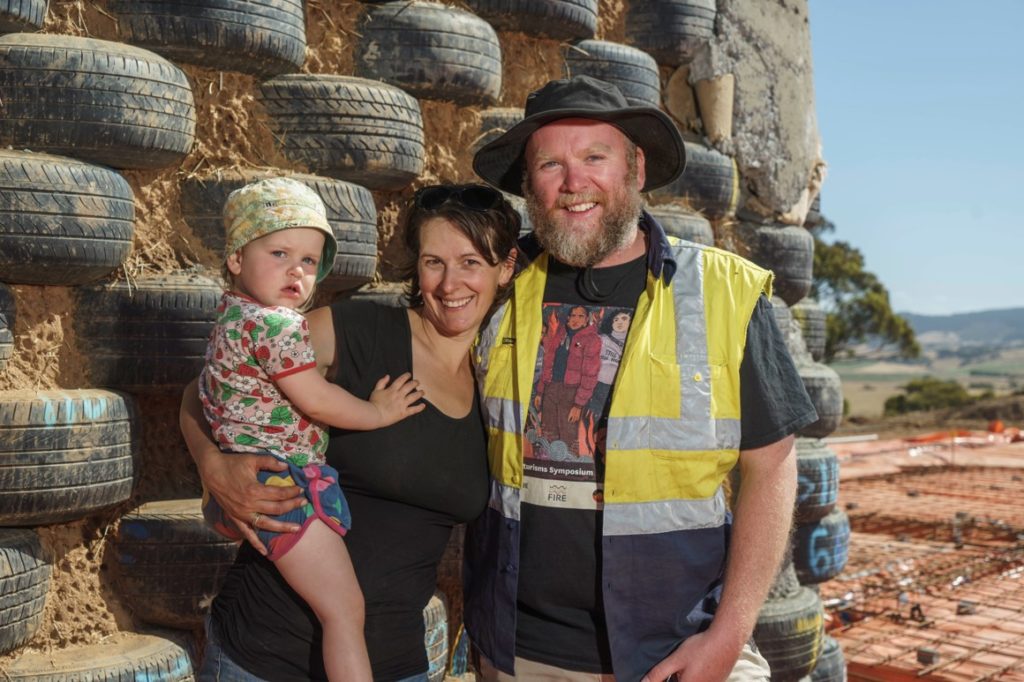 Their project began six years ago when they bought 110 acres of bushland. They developed most of it to run sheep, and they’ve planted crops for home consumption. Their interest in a sustainably-built, zero-energy home led her to the concept of Earthships – an architectural design which stores the sun’s energy in an ‘earth shelter’; provides non-mechanical ventilation to replace air-conditioning; protects the occupants from extreme heat; and provides them with warmth at night and during the winter.

The architectural drawing of their Earthship home is featured at the head of this article. 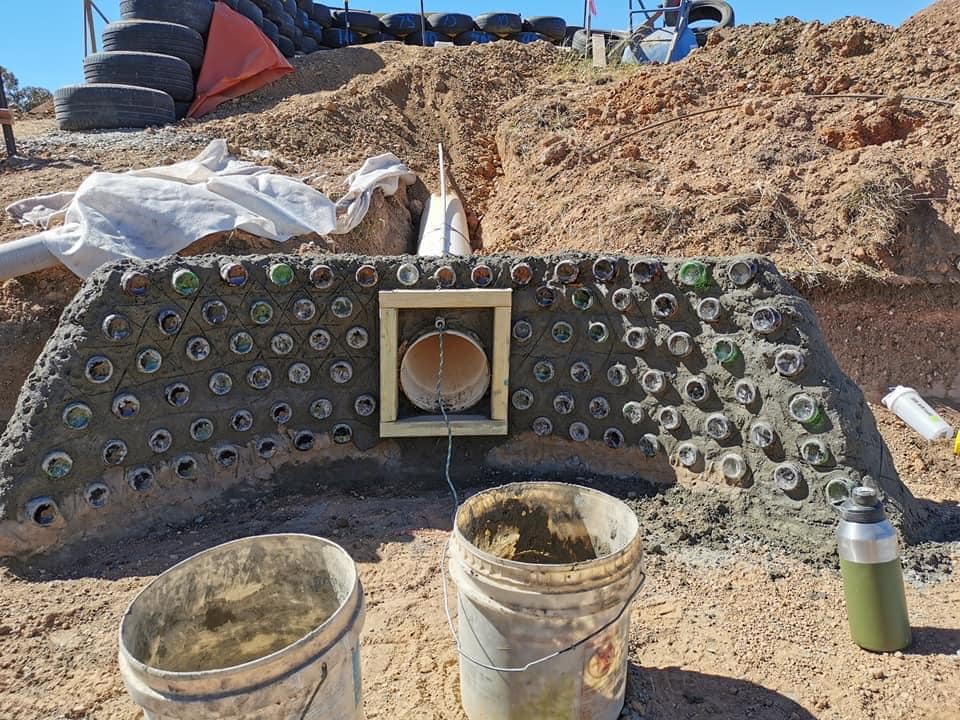 They stayed in an Earthship prior to building one, and became convinced of the wisdom of the design when they enjoyed a steady indoor temperature of 18°C whilst overnight temperatures had fallen to 7°C outside. The design incorporates ‘earth tubes’ through which air travels by natural convection to maintain a ‘chill room’ at a temperature of 10°C …in spite of soaring desert temperatures. 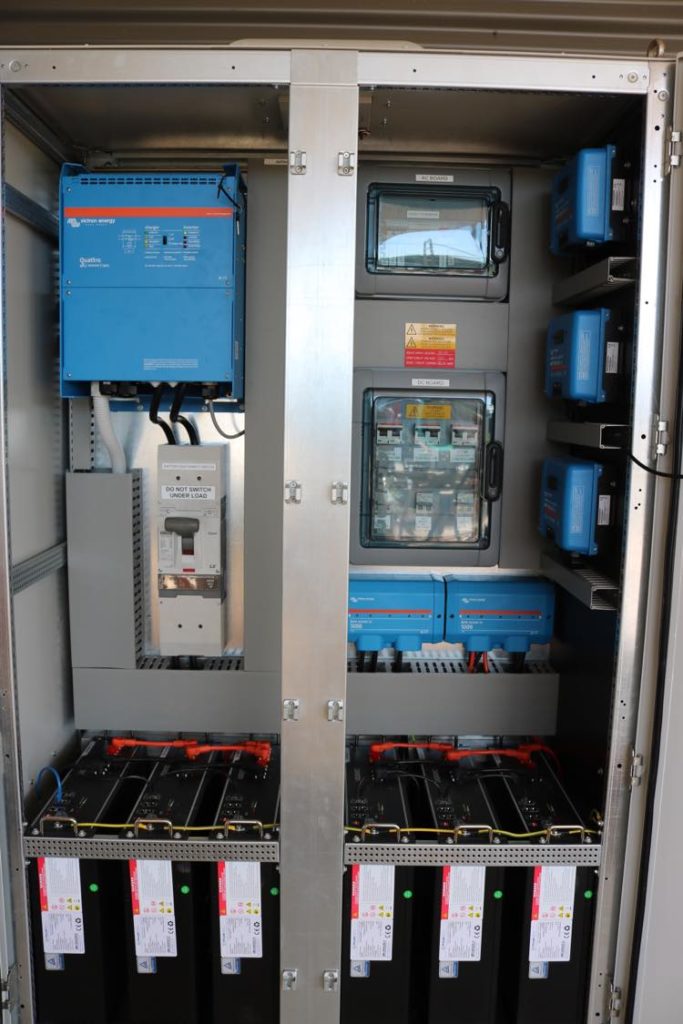 They decided to install off-grid solar-based private power – a system which is expected to provide 15000kWh of free energy per year. The System has been installed by MyEnergy who have over ten years experience of providing residential and commercial power solutions. It comprises: 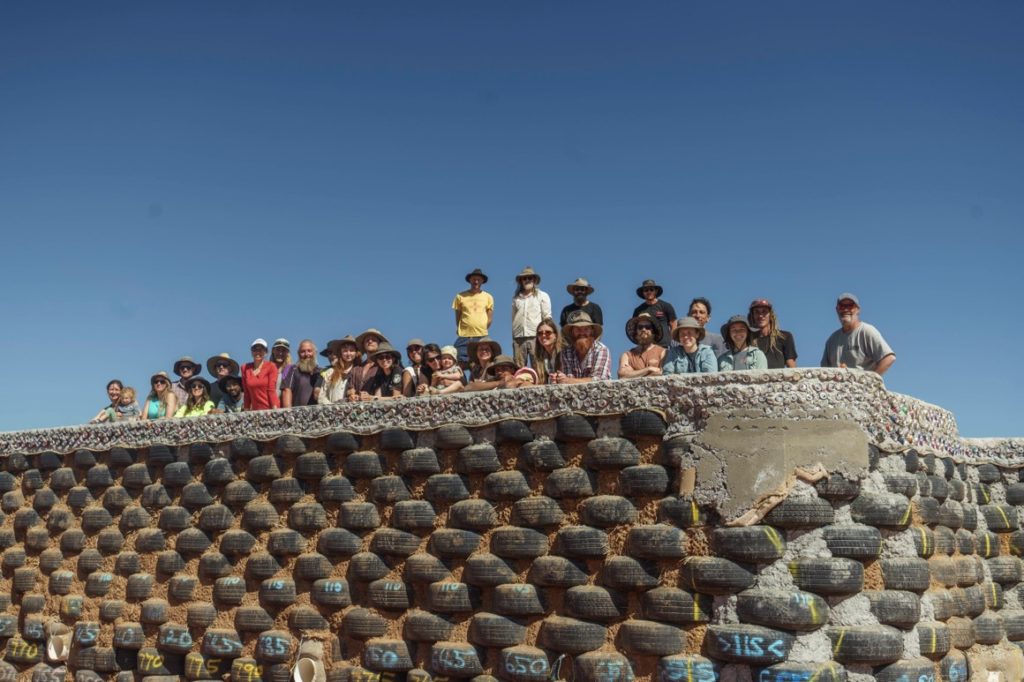 They’ve chosen to construct their 187m² house by hosting training courses organised by Earthship Eco Homes designer and workshop trainer Dr Martin Freney. Once building code approval has been obtained for a project, Martin instructs students in Earthship building method and theory, hands-on, at a cost of around A$100 per day. 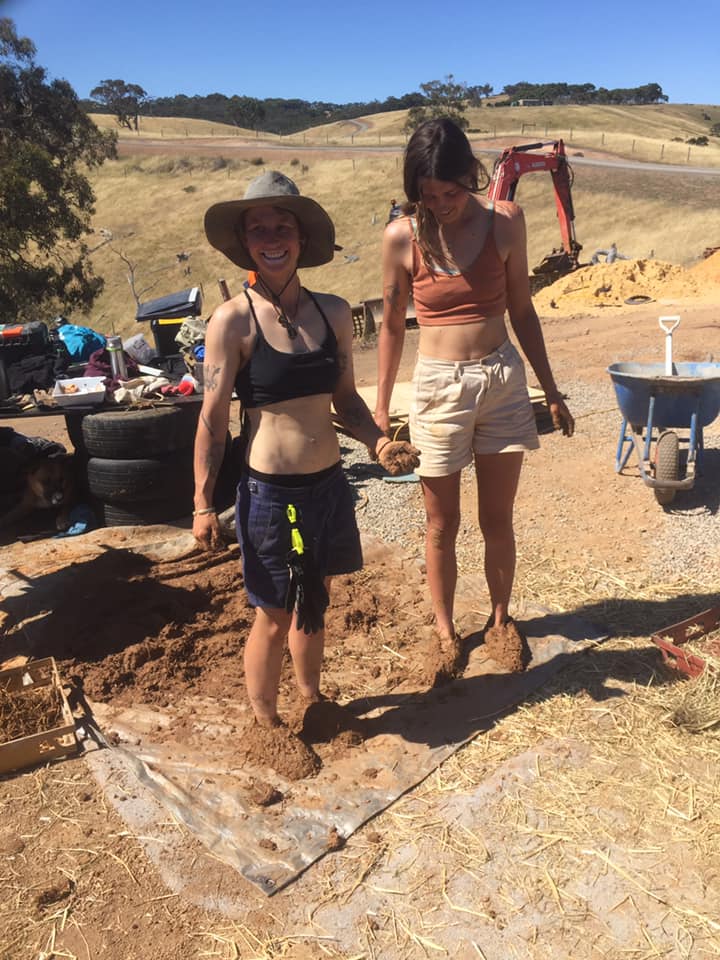 Stamping out the clay

Evie provides refreshment for the workers – and her house is built from their labour. It’s a sociable and fun way to self-build, keeping costs of construction to a minimum. Evie says they are lucky to have a heavy clay soil for building, though it’s not so good for farming! 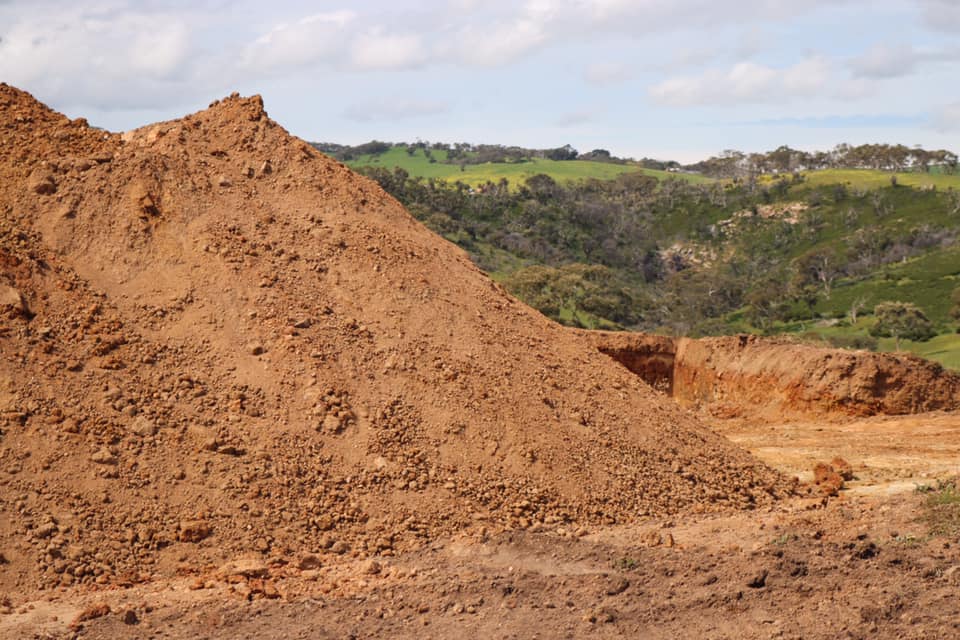 The glass and earth design makes maximum use of natural materials lying close-to-hand. 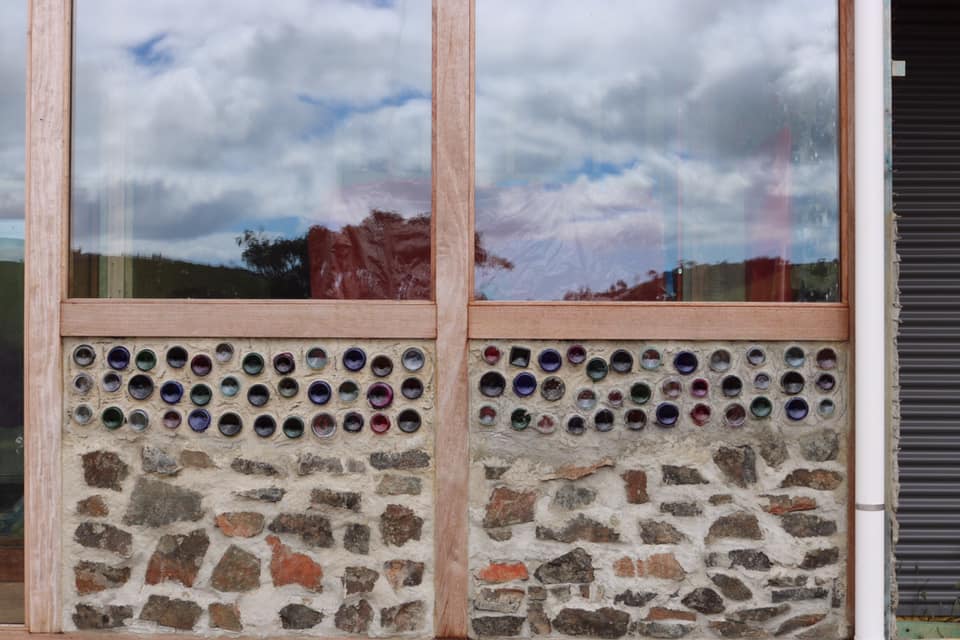 A glass wall, facing the sun, admits solar energy into the house where it is absorbed by the building’s ‘earth mass’.

The foundations incorporate recycled materials – typically used tyres filled with rammed earth, and some of the walls have bottles and cans embedded in them …sometimes the glass bottles are left revealed allowing coloured light to be conducted through the wall to great effect. 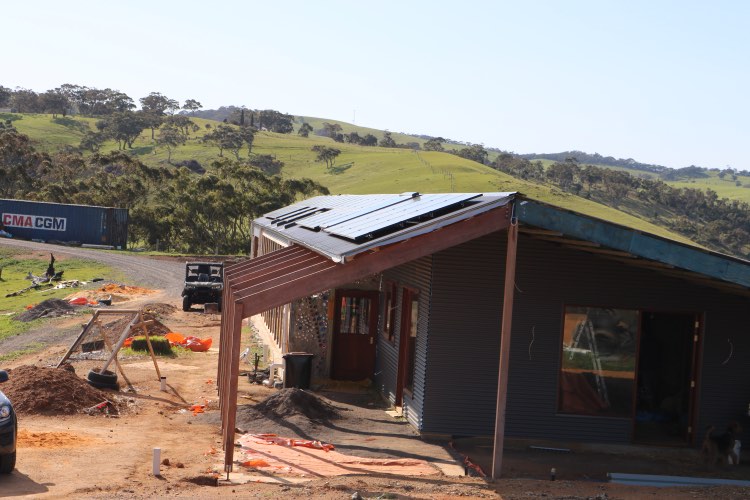 With Earthsip building there’s plenty of room for innovation such as the solid concrete floor which has been stained with Ferrous Sulphate – a chemical commonly used in agriculture for lowering soil pH – and which Evie says has given the concrete a pleasing earthy colour. 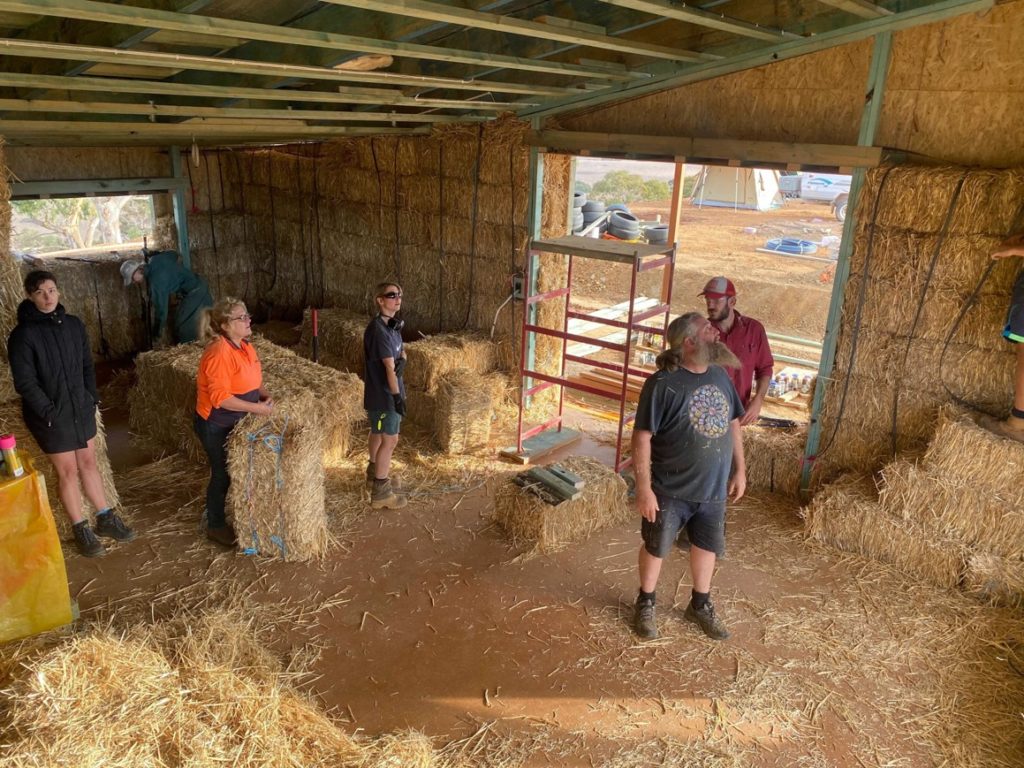 Straw is a ‘waste’ material. Storing carbon, it actually reduces the carbon footprint of construction – and even better, it super-insulates the building …further reducing the requirement for energy expensive domestic heating or cooling.

The walls are clay-covered straw bale and are further protected from bushfires by a tin sheet – an incombustible barrier which is required in her area (BushFire Attack level 29) to mitigate natural risks. Evie’s roof is also tin – it’s quick to lay, light, inexpensive, and has a design life counted in decades. 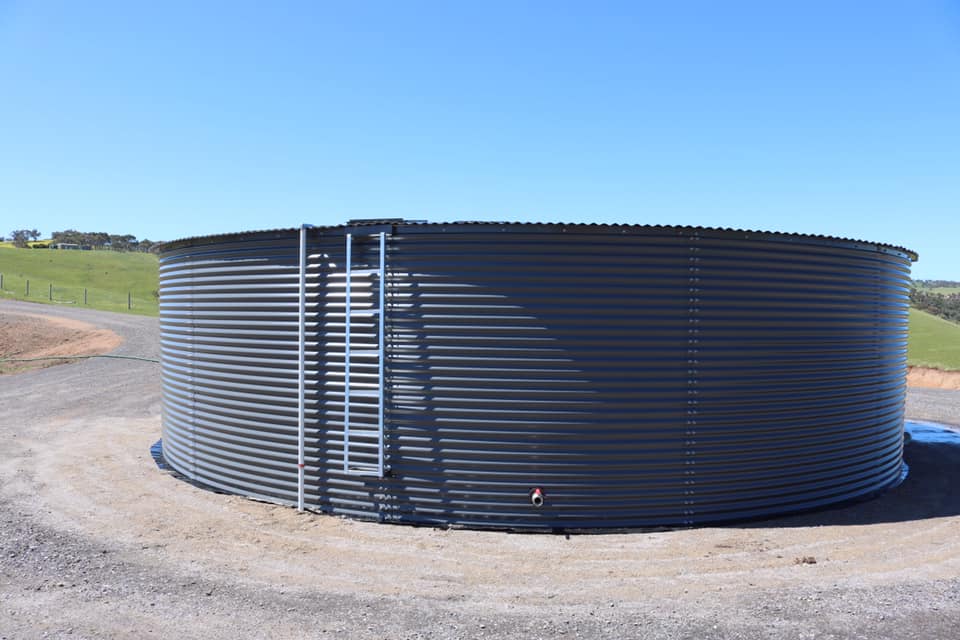 Domestic water is provided by rain-water harvest and stored in a 137,000 litre tank with 35,000 litres stored in a shed for agriculture, and a further 23,000 litre mandatory storage for fire-fighting. Waste (grey) water is used on-site for irrigation and fertilisation. 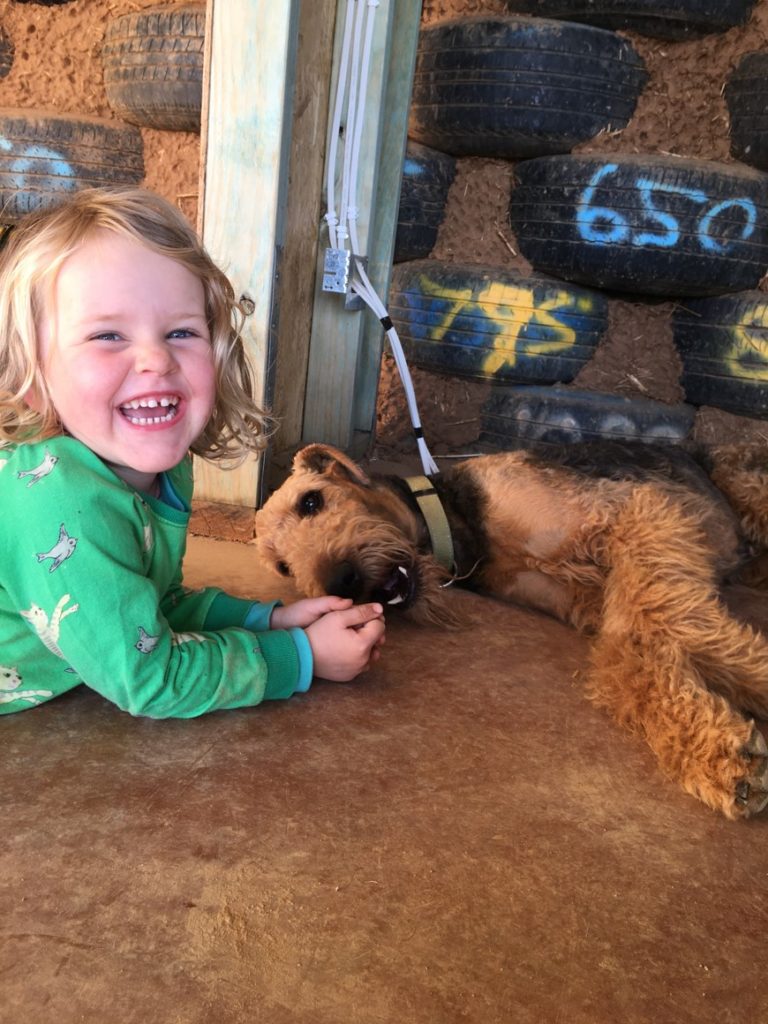 By justin
Oct 8, 2021
Previous
Training Trailer - what do visitors think?
Next
PAYGo Power - working with Angaza 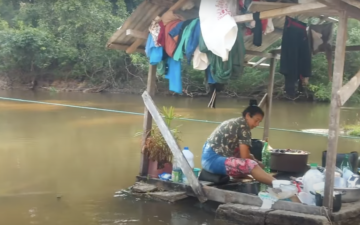