This document explains how to integrate a Victron system onto a Marine MFD, such as those from Garmin, Raymarine, the Navico brands B&G, Simrad and Lowrance as well as Furuno other brands.

There are multiple options, and how to best integrate depends on the customer requirements, MFD brand and model as well as used Victron components. 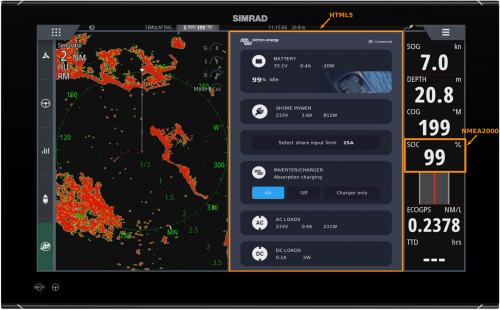 NMEA2000 is a communications standard used for connecting marine sensors and display units within ships and boats.

Some of our products feature a VE.Can port; which can be directly connected to the NMEA 2000 network. No electronic converter is necessary. The conversion cable required is the VE.Can to NMEA2000 cable.

The GX devices can measure tank levels, and make the resulting data available on the NMEA2000 network.

Also, they can read tank leven data from the network, when there are other tank senders connected. It will be shows it on the Victron screens as well as transmitted to the VRM Portal for remote monitoring.

Q2: What about terminators and network layout?

A N2K CAN bus network needs to be laid out as in a backbone configuration, using drop cables to connect to each device. Also, there should be only two terminators in the network. Therefore:

Q3: What PGNs does a GX Device transmit on N2K?

See the NMEA 2000 chapter in the CCGX manual for details.

Q4: Can integration onto Raymarine displays also be done without Empirbus NXT?

Yes, see the Raymarine integration page on our website.