Instances are used in an NMEA 2000 network to identify multiple similar products connected on the same network.

As an example, take a system with two battery monitors (one for the main battery bank, and another for the hydraulic-thruster bank) and also a Quattro inverter/charger. All three of those devices will send their battery voltage measurements out on the N2K network. For the displays to show these values at the right place, they need to know which voltage belongs to what battery. That is what instances are for.

There various types of instances, and for marine systems are two that matter: the Device instance and the Data instance. Details and differences of each type are explained in detail in the Cerbo GX manual, NMEA 2000 chapter.

Not all MFDs use instances the same. Some do not require setting up instances at all, others require to change the Device-instance and yet other brands require unique data instances or both.

Below documents explain the details for all major brands. Besides details on the required instancing; it also contains notes about supported, as well as non-supported, PGNs.

1.4 Different methods for setting up instances

As the NMEA2000 protocol prescribes commands to change an instance by sending commands to a device, there are various ways of changing instances. The purpose of this document is to describe all commonly used methods.

Besides the here described methods there are more, for example some MFDs allow changing instances as well.

The Settings → Services → VE.Can → Devices menu shows a list of all devices on the N2K / VE.Can network: 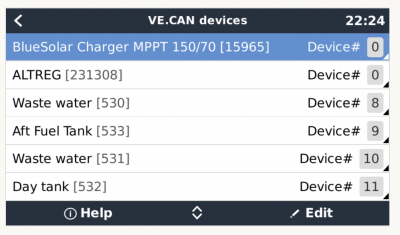 By clicking the right button, a detailed menu is shown: 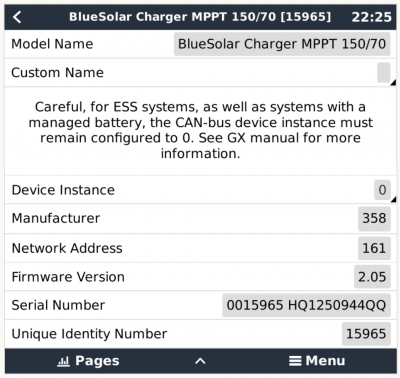 Note: make sure to use a recent Actisense driver. Otherwise the instance might not ‘stick’. 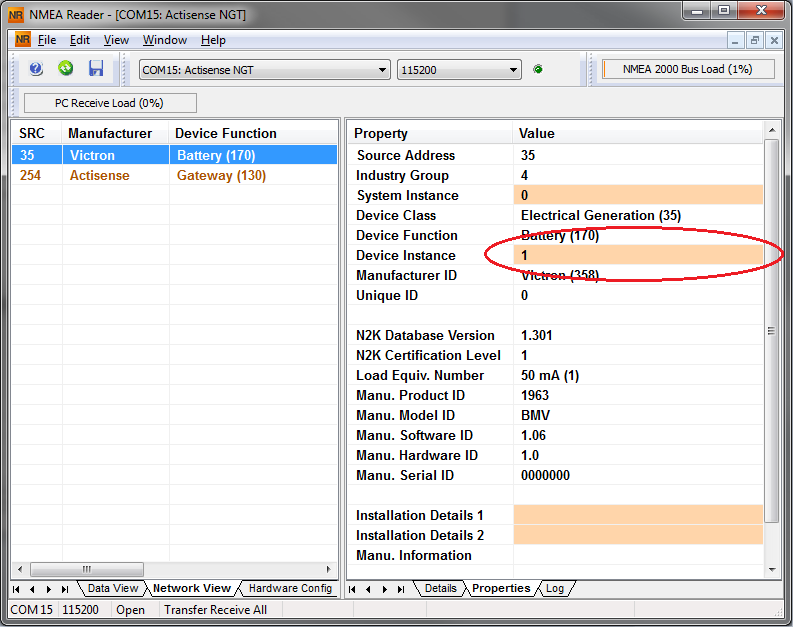 Notes for BMVs, Lynx Shunt and the Lynx Ion + Shunt:

WARNING: At Victron we do not understand what and how the Maretron software works with regards to this. We advise to use another tool, not Maretron, so that you know what you are doing, ie know what instance you are changing. So far, we have not been able to use Maretron software to change a data instance. And changing the other instance, the device instance can also be done straight from the Victron GX device its user interface. To change a data instance, for example to fix instance conflicts as reported by the Maretron software, we recommend to use Actisense. Not Maretron.

Open N2KAnalyzer and make sure that the “Unique Instance” column is turned on (i.e. checked) using the Setup>Columns menu item. 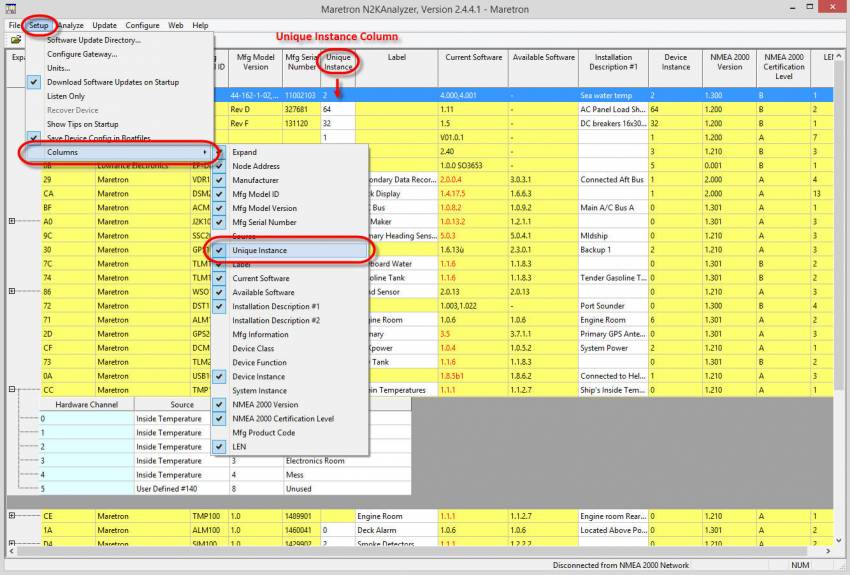 Within the N2KAnalyzer main window, any cell with a white background can be edited by clicking in the cell and typing in the desired value. You can see from the following screen shot that a few parameters have a white background including Label and Installation Description #1. To change a devices instance, click in the Unique Instance cell for the device you want to change and type the new number followed by a carriage return. If the particular products accepts the instance change, you will see the new instance number reflected in the cell. You can also use a tool within N2KAnalyzer to check that all products on the network are uniquely instanced. Use the Analyze>Instancing menu to verify correct overall system instancing. 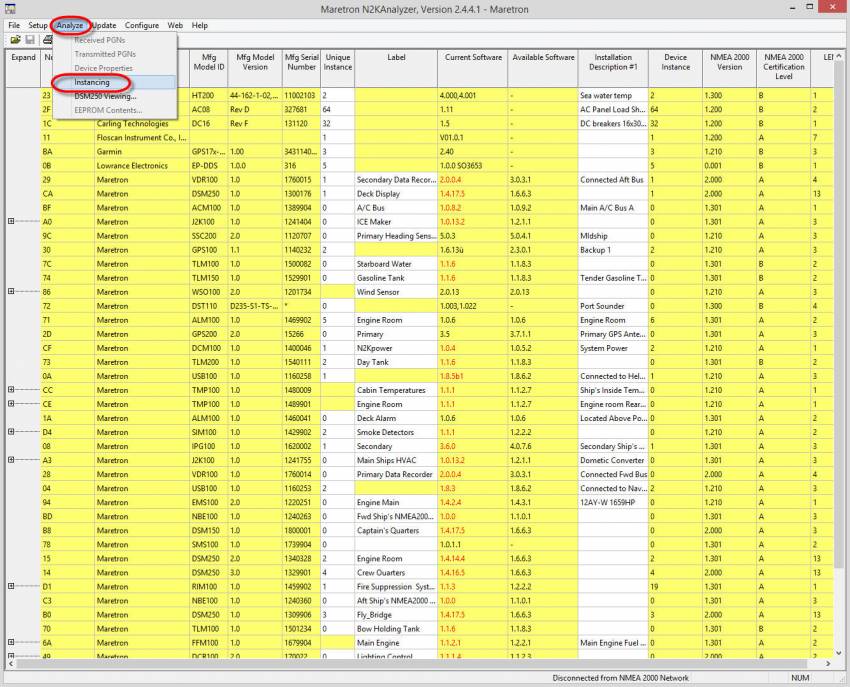 6. Changing the instances from the GX command line

Instead of using Actisense or Maretron software, it is also possible to change the VE.Can aka N2K Device instance from the GX Device shell. To get root access, follow these instructions: Venus OS: Root Access.

Once logged into the shell, follow below instructions. More back ground information of the used commands such as dbus and dbus-spy is found by reading about root access document.

6.2 Warning: better use an Actisense!

Note that the methods explained in this Chapter 6 are usually not recommended. Use an Actisense instead, see chapters 3 and 4 instead.

To change them, do a SetValue call to the DeviceInstace path like below. Or, perhaps easier, use the dbus-spy tool.

These lines read it, then changes it to 1, then reads it again:

The data instances used for the NMEA2000 out feature are stored in local settings. Here is a snippet of the lines, taken by using the dbus-spy tool that also allows changing entries:

The Data instances are the “Battery-”, “DCDetailed-”, and so forth instances.

It shows a Skylla-i (the charger). di1 in the name means that it is currently on DeviceInstance 1.