In systems with a BMV, the VE.Bus state of charge is hidden. Why?

If a BMV is in the system, the VE.Bus State of Charge (SOC) is not stored into the VRM Database.

When there is a BMV in the system, and a Multi or Quattro, there are two state of charges being calculated for the same battery. Since the algorithms differ (see next FAQ entry for more information) they will hardly ever show the same percentage, and showing both causes confusion and questions.

What is the difference between the BMV SOC, and the VE.Bus SOC?

SOC stands for State of Charge. The BMV SOC is the state of charge measured by the BMV Battery Monitor. It calculates this value based on measurements taken by the shunt. And, assuming the shunt is installed in the correct place in the system, it takes into account all the loads and chargers.

The SOC taken from VE.Bus is calculated by our Multis and Quattros. To calculate the SOC, they use only the internally measured charge and discharge currents. Because of this you can only use it for some system types, see here for which ones. The battery capacity can be configured with VEConfigure.

BMV SOC vs VE.Bus SOC algorithm The BMV has the advantage in its calculations that it sees all DC currents: so this includes MPPT solar charger currents, DC loads (typical in marine and automotive applications, for example alternators, lights and pumps), or other DC chargers. The Multi and Quattro have the advantage that it knows when the bulk state is finished, and can then sync the VE.Bus state of charge to 80%. Instead of (as the BMV does) having to wait until the battery is really full (sync parameters are met), and only then will it sync to 100%.

What are the requirements for the Solar yield and Consumption tab?

These are the Solar yield and the Consumption tab on the VRM Portal: 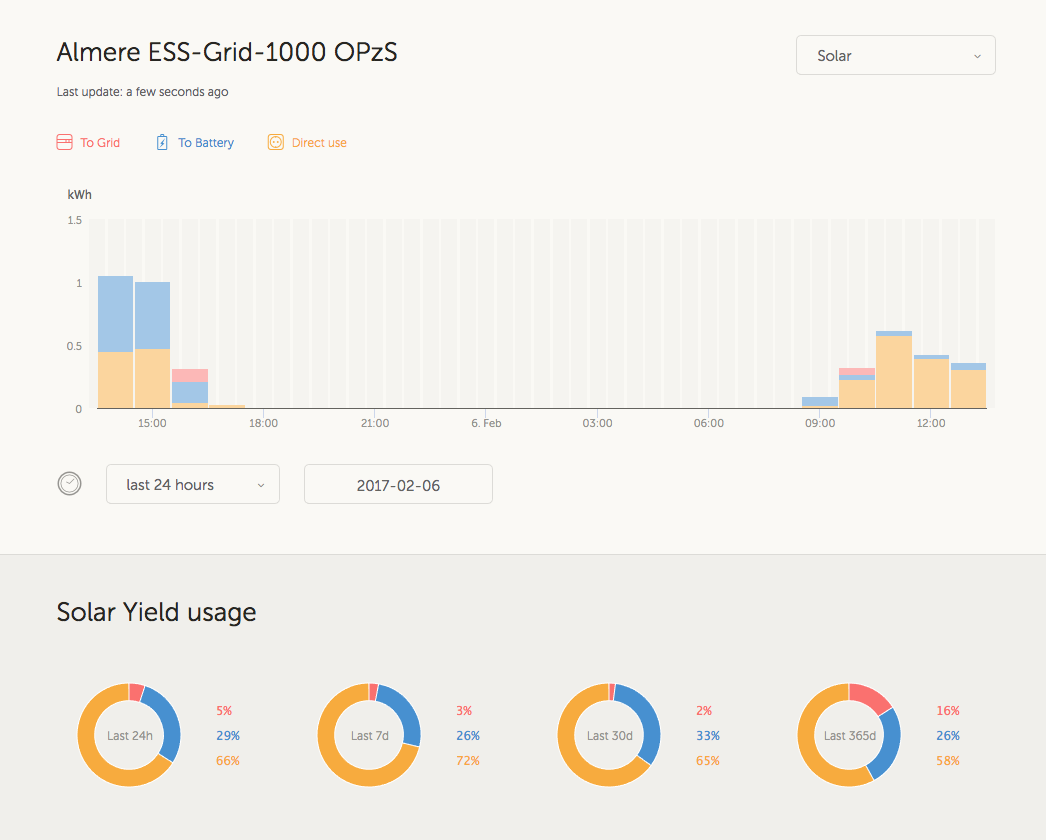 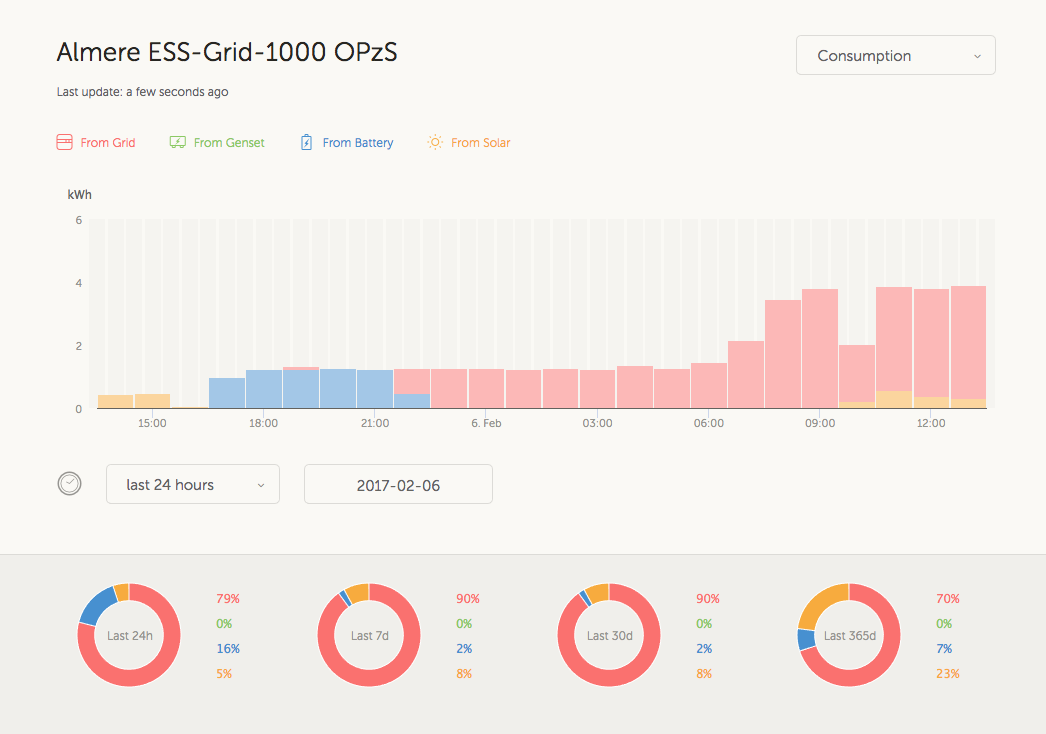 These graphs work on information calculated by the GX device (Cerbo GX or Venus GX), based on energy counter values read from connected devices.

Extra requirements for systems with AC Coupled PV (ie a grid-tie inverter on the output), for example ESS:

‘Has DC system’ is a feature on a GX device. When that config switch is enabled, a new box called 'DC Power' appears on the GX display. Its value is calculated from the differential between the power measured by the bms or battery monitor, and the power flow measured by the inverter/charger and other sources that are actively monitored by the GX. Its typical use is in Marine and Automotive applications, as they have alternators, and lights, fridges, and many more DC loads. For more details, see the GX device manual.

Note that the same data used to show these energy graphs is also available as a download. See the Advanced tab on VRM, and then the download icon on the top right.

How does the screensaver work? How is the displayed state determined?

The screensaver is disabled by default but can be configured in your profile settings to automatically show after a period of inactivity. You can also open the screensaver directly by pressing the “s” key twice.

The screensaver displays which source of energy your installation is currently running on. This is determined by looking at which source of energy (the sources being solar, generator, battery and grid) is delivering the largest amount of energy to consumers (locally connected devices using the energy). Then, if no consumers are using any power, it looks at which source provides the largest amount of energy to the battery. Then, if no battery is connected or it is not being charged, it looks at which source is delivering the most energy back to the grid. If at this point the source is still not determined, apparently no energy is being produced or used anywhere, and the state defaults to 'on grid'.

I want to analyze the data in a spreadsheet, how do I do this?

Open the Advanced tab, choose a date range, and then use the Download CSV or Download XLS link at the top right.

How can I remove an installation from my account?

Go to the tab Settings –> General and scroll to the bottom of that page, then click the 'Remove' button. This will unlink the installation from your account.

How can I move an installation's history from one GX device to another?

You will need to connect the new GX device to the internet, and register it. Take note of the VRM Portal id.

Then open the old site on VRM, and go to Settings → General.

There is an option there Replace the GX device of this installation.

This will explain the steps of the procedure.

Why are some values shown red?

In case the data is too old, which means older than would have been expected from the configured logging interval, the value will be shown red. Use the System overview page to check if there are products that are not connected anymore. One typical example where this might happen is:

For how long is the data being stored?

The data shown in the advanced tab is being stored for at least 6 months, with exception of Battery state of charge.

The data used to show the solar yield and the consumption tab (kWh data) is stored 5 years minimum.

How can I zoom out any of the graphs?

The graphs can be zoomed out to their original zoom level by clicking the 'options' and then the 'Reset zoom' button in the graph.

Why do I get such a weird high value for AC Input when a PV inverter is feeding back to the grid through the Multi?

Since VE.Bus firmware version xxxx205, the Multis and Quattros report the direction of the AC input current. Earlier VE.Bus versions reported only the absolute value: you could not see if the power was being fed back to the mains, or taken from the mains.

VGRs, VGR2s and VERs interpret this value incorrectly. They show around 650 Amps instead of -5 Amps.

If you really want to see the right data, replace the VGR/VGR2/VER with a Cerbo GX.

What is the column logtime Offset in the XLS/CSV download for?

Use it to see the quality of the Internet connection.

The values relate to the backlog feature. Usually the column is either empty, or you see series of rows with a decreasing logtime offset. Once zero, the columns are empty again. These series mean that there was a problem with the Internet connection. And the value shown is the number of seconds for which that particular row of data had been backlogged.

How can I change my email address, or add new additional users?

If the new user will be an Admin, you will need to enable full control.

That is all, there will be an email sent to the new email address and you can use that to login.

There is no option to delete the old account, though it can be removed from a specific installation.

No data will be lost during this procedure.

How can I upload very large database files to the VRM with a 64MB upload limit?

The VRM Portal only allows up to 64MB uploads for GX device data files. The portal will accept zip files, so you can compress the databases and then upload those. A compressed 64MB file can contain up to a year or more worth of data!

I have just connected my GX device after not being online for a long time, why is it not updating?

The first thing to check is the VRM menu to make sure that the VRM is connected and communicating - if it isn't, follow the troubleshooting here.

If you are seeing that the GX device is connecting to VRM, then it can take up to a few hours or more for the data to sync to VRM and for the updates to show, depending on how much data there is to catch up. If it still has not got up to date after 24 hours of connection time - try asking for more help on http://community.victronenergy.com