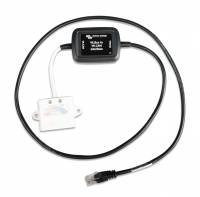 Note that for brevity, Multis and Quattros are called VE.Bus devices in this manual.

This product is deprecated, and no longer required!

This interface was, only!, used in Hub-1 systems with grid-feedback enabled. It interfaced between the VE.Bus system and one or more MPPT solar chargers with a VE.Can connection: the MPPT 150/70 and/or MPPT 150/85.

But, since the release of CCGX v1.73, it is no longer necessary.

Normally these solar chargers will reduce their output power as soon as the battery voltages hits the absorption voltage. When the goal is to feedback excess power to the grid, the solar charger should continue to operate on the Maximum Power Point instead. By using this interface together with the Hub-1 Assistant, that is exactly what will happen: the VE.Bus device will instruct the solar charger to continue maximizing solar output, and any excess power available on the DC side will be fed back by the VE.Bus device into the grid.

Note that this is the only purpose of this cable. In all other systems, where feedback of DC-coupled PV power to the grid is not intended, do not use this cable. 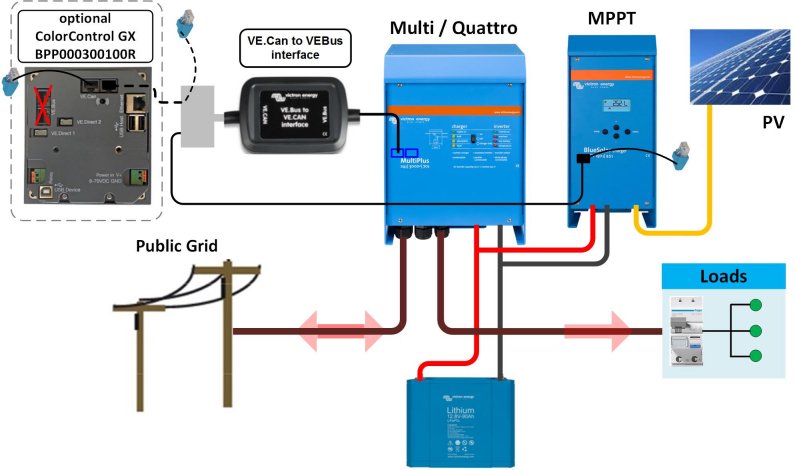 Either way, with or without CCGX, make sure that the VE.Can network is terminated on both sides, using the VE.Can terminators supplied with the CCGX and the MPPT charger controllers. They are also available for purchase as a separate accessory.

Once properly configured, including the assistant in the VE.Bus device, the display of the solar charger will show “HUB-1” to indicate that all is working properly.

There are two ways to update the firmware in the VE.Bus to VE.Can interface:

The Solar yield and Consumption tab on the VRM Portal do not yet work. We have planned to make them work, though unfortunately cannot yet give a fixed date for the availability of the solution..