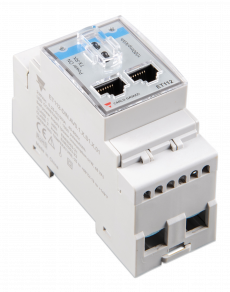 This document is the manual for the single phase max 100 A Energy Meter.

The Energy Meter can be used for four things:

The meter is connected to the Color Control GX. There are two options in its wiring:

Other ET112 models from Carlo Gavazzi can also be used, as the communication is the same.

This configuration option of either Grid Meter, or PV Inverter is set in the GX device. That selection will effect how the system should be wired, and how the information received from the meter is displayed on the screen.

In this example configuration, a single ET112 is configured as a Grid Meter and will measure the grid import/export of an ESS system with a AC PV inverter. While the exact production of the AC PV inverter will not be seen, this is still a useful configuration as it allows the AC PV production to first flow to the non-essential loads on that same circuit.

This can be useful if the Victron ESS system is installed as a retrofit to an existing AC Solar inverter installation with some larger loads that aren't wired through the Multiplus.

If you wanted to see PV production separately you could use the “single phase dual function mode” of the ET340. 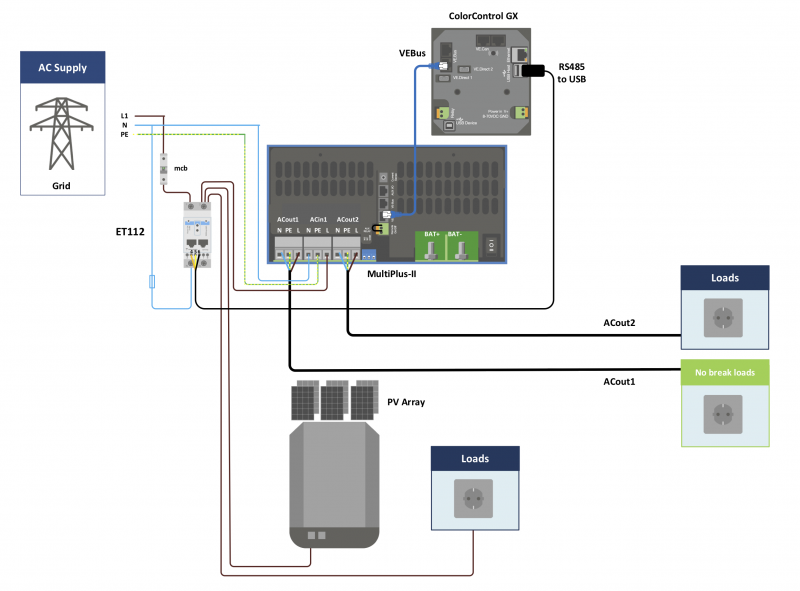 Connect the Zigbee to USB converter to the CCGX using the supplied USB cable. A few seconds after connecting, the active LED should be on and the TX/RX LED should be blinking (the converter takes its power from the CCGX, so the CCGX needs to be switched on as well). 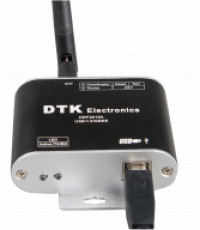 Connect the Zigbee to RS485 converter to the ET112 energy meter:

Connect the 12V DC power supply to the Zigbee to RS485 converter. When the power is switched on, check the LEDs again.

Please note that there is a new zigbee converter available now, that is -not- backwards compatible with the old converters. If you have a non compatible set, please ask your supplier for a correct version.

Option B: Wired connection to CCGX

Connect the Energy Meter to the CCGX using the USB to RS485 cable. The RS485 to USB interface cable between the CCGX and the Energy Meter can be extended up to 100 meters; make sure that the extensions of the Data+ (orange) and Data- (yellow) wires form a twisted pair.

The red, green and brown wire coming out of the USB to RS485 cable are not used. Note: You can wire on a RJ45 plug which can plug into the front of either RJ45 socket of the Energy meter, it has the same pin out.

After proper connection and powering up, the meter will be visible on the CCGX in the Settings → Energy Meters menu: 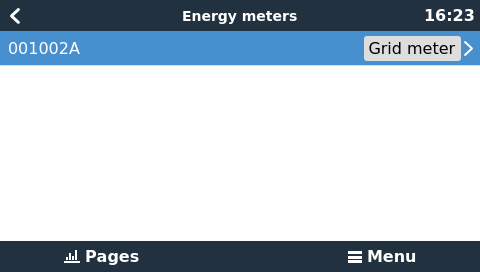 The menu lists every meter found. And in the gray box at the right side it shows the configured function.

After selecting a meter, see its detailed settings: 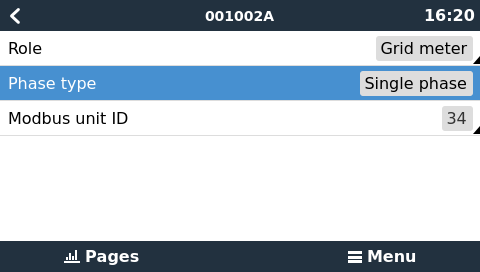 4. Multiple ET112 Meters in one system

To connect multiple Energy Meters, wire each meter to a separate RS485-USB converter. Which are then each plugged into a separate USB socket on the CCGX. See NOTE 1 Below

Connecting multiple ET112 meters to the same RS485-USB cable is not possible: the ET112 meter has no display and its Modbus address can therefor not be changed.

Note 1 You can connect the ET112 in parallel, just need to change the MOD address to another number using the Configuration software from the supplier which is free from Carlo Gavazzi Web site.