The only inverter/charger approved by LG for use with the Resu battery is the MultiPlus 48/3000/35. You are not able to use these in parallel or three-phase configurations.

It is essential to use the CAN-bus connection of the GX device with the LG batteries for the keep-alive signal, communication of charge and discharge limits, error codes and state of charge.

The minimum required firmware version for the Color Control GX is v2.15. It is highly recommended to use the latest firmware version on all connected devices, including CCGX/VENUS GX, Inverter/Charger and MPPTs. There are regular updates to improve performance and reliability.

To use the LG Chem Resu and Victron equipment, it is necessary to use a GX device (eg CCGX or VenusGX). It takes care of sending the necessary canbus keep-a-live message to the LG Resu. Without it, the LG Resu will open its internal circuitbreaker after 10 minutes.

Do not attempt firmware updates using the LG Chem battery for power until you can confirm that the battery is connected and showing on the GX device.

Use the VE.Can to CAN-bus BMS type B Cable, part number ASS030720018. Plug the side which is labeled Battery BMS into the LG Chem Resu BMS. Plug the side labeled Victron VE.Can into the GX device.

More information about the cable can be found in its manual.

Set the SW select switches 3 & 4 on the battery to select the right protocol (LGC Smart).

Note: make sure to double check the float voltage after completing Assistants. 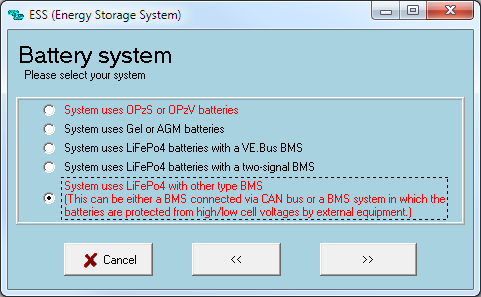 What to do if the LG Resu 6.4 circuit breaker has tripped?

Starting from version v1.40, the CCGX will detect a tripped LG circuit breaker. If this happens an error will be shown on the display ('Circuit breaker tripped'), both LEDs on the LG resu battery will be off, and the Multis/Quattros will be switched off.

Why would the circuit breaker trip? The only circumstance, apart from faults and broken products, in which the circuit breaker could trip is during a mains failure. During the mains failure the Multis/Quattros will power the AC Loads connected to their output (UPS Loads in above system schematic). And will no longer maintain the discharge current within normal limits, as there is no way for the inverter to reduce the discharge current. Other than completely shutting down of course.

To get the system running again: